Tangenstugan was built in the 18th century. This was the main building at the Tangen farmstead at Långlanda in the Eda parish, close to the Norwegian border. This was the home of a well-to-do farmer in the second half of the 18th century. It has a room on each side of the entrance. To the left is a large living room, for weaving and other tasks the farmer family usually performed when inside. To the right is the family bedroom. The house was moved here in 1928. It has a wood roofing, with layers of birch bark under the timber. Another two buildings from the old Tangen farmstead have also been moved here, Visthusboden (the timber larder) and Loftskjulet (the tool shed). 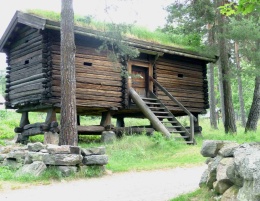 Visthusboden was built in the late 17th century and is the farmstead storehouse, where the farmer not only stored grain, flour and peas, but also salted, dried, pickled or smoked food, like sausages, meat, fish and game. There were many ways of storing food for long winters and coming seasons of famine. In this house the farmer kept grain and flour to the left, meat and sausages to the right. The house is standing on erected timber, free from the ground. This was a construction used in order to avoid rodents damaging the stored food. The roofing is from wood, with layer birch bark under the timber. Visthusboden was moved here in 1937. 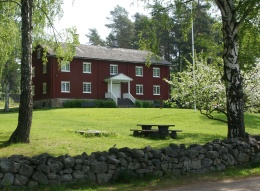 Storbondegården, the two-storey main building of the farmstead Öststuga was built around 1813 at the village Berg, in the Ny parish, not far from the Norwegian border. It has been the main building of Sågudden since 1922. The roof is covered with local slate.
Here you will find objects for a well-to-do farmer and his family of the early 1800s. You will find the original panelling, rooms, the kitchen, an extra kitchen for the grand-parents, furniture, tools, but also a valuable collection of painted cupboards and unique “kurbits”-paintings from Dalarna. In the basement you will find a modern exhibition of findings from the Stone Age to Mediaeval sculptures and objects from brightly painted churches from the Lutheran era. 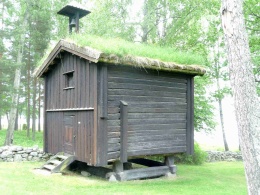 Stolpboden was built in 1784. It originates from Skällarbyn, in the Köla parish. It served as a two storey storehouse, the upper storey being used for crops, grain and flour, the lower storey for milk, sour milk, meat, game and bread.
On the turf roof you can see the vällingklocka (gruel bell). This kind of bell told people working at a farm when it was time for a break. But it also chimed a warning when fire or other sudden challenges gave cause for alarm. It was moved here in 1929. 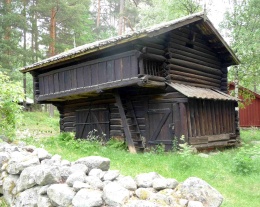 Loftskjulet was also part of the old Tangen farmstead. The Loftskjul was built in the 17th century. On one locking iron you can read MOS 1697, probably the initials of the owner. The ground floor was used as a shed for tools and for cut wood. At times the farmer also kept sheep here. The upper storey served as summer sleeping quarters for the farm hands. It has a sheltered loggia that was also used as a refuge, if danger called for this. You could pull the staircase up if needed. The Tangen farmstead was quite close to the Norwegian border and many wars were fought between Sweden and Denmark-Norway at that time. The roofing is wood, with layer birch bark under the timber. It was moved here in 1928. 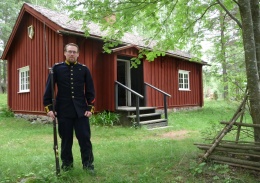 This cottage was the home of a soldier with his family. In 1675 King Karl XI reformed the Swedish military organization. Throughout Sweden and Finland the villages had to support a soldier. He was to be given a cottage, and the means to support a family, i.e. some land for growing crops, and some extra supplies on an annual basis. This soldattorp (soldier’s cottage) served as a home for the soldier of Kärrsmossen. He was the soldier No 78 in the 5th company of The Royal Wermlanders. And so soldiers lived in this cottage with wives and children, one family after the other until 1900. The cottage is made of timber with red panelling. The roofing is slate and water pipes were carved out of wood. It was moved here in 1944. 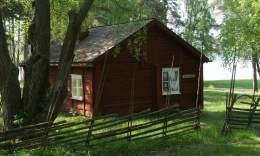 Olof Eriksson was well known for his smoked sausages, hams and other meat. He was called Olle Rökare (Olle the Smoker) and lived at Haga, Arvika. The cottage was moved in 1967. Timber cottage with red panelling and roofing with slate. Outside the house you can see the little smoke shed. 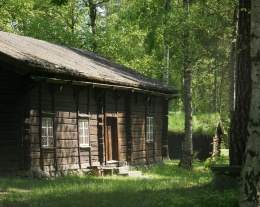 Rökstugan (the smoke cottage) was a Finnish farmstead at Spettungen, Lekvattnet parish in northern Värmland. People migrated here from Finland attracted by the big fir tree forests. Those made a good base for farming by fire (svedjebruk). In the ashes were planted a special type of rye, which gave a rich harvest from just a few seeds. Finns had been encouraged by Duke Karl (later king Karl IX) to settle in his duchy already in the 1580s. The settlers were granted a few years of tax deduction.

In the smoke room there is no chimney. Instead there is a small wooden smoke outlet, which was used only when the smoke inside became too thick. The large smoke stove was used for heating and the room was used for all- purpose-living. It was built in the 1780s. Some thirty years later the Finnish farmer had achieved the means to build a little “Swedish-style” kitchen and a “Swedish room”, which were meant to emulate Swedish farmsteads of the time. In the Rökstuga you will find many objects made of birch bark.

This rökstuga was the first house to be erected at Sågudden in 1915 and is still an excellent example of a rökstuga, evidence of the Finnish immigration, a valuable addition to the population here in Värmland.

The shed for smoking meat and fish.

Allen Hopwood Grey donated this “lover’s nest” to Arvika in 1878.

Väderkvarnen comes from the Botilsäter parish on Värmlandsnäs, the long peninsula that almost divides Lake Vänern. It was erected here in 1925. The mill house has two sets of milling stones. However, you could only use one pair at a time. The machinery is intact. The wings are being repaired (2015).

Nystuga (the new cottage) opened in 2009. There is a welcoming café in one wing and an exhibition or conference room in the other. Here are also our offices and the café kitchen. 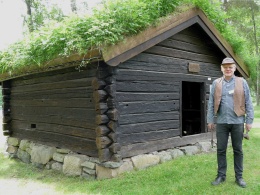 The Blacksmith’s workshop with forge, stove and all utensils was erected here in 1941. It was once the smithy of a legendary blacksmith called Mattes, who was also gifted in sorcery and magic. His workshop was the smithy of Glassnäs village in Älgå parish. Turf roofing and earth floor because of the risk of fire.

This beautiful timber house was a dryer for the malted barley. This kölna (kiln) originally served as malt dryer at the village Sandviken in the Brunskog parish, just east of Arvika. It was erected here as house number two, already in 1916. Downstairs there is a primitive stone oven whereby the barley is softly dried and malted. The roofing is turf.

This cottage was at times the abode of the author and writer Gustaf Schröder. He was known to many Swedes for his colourful books on the wilderness of Värmland and other surrounding provinces. The main themes were hunting and fishing. The house was built in the early 19th century and served as a cholera ward in 1834. It was moved here in 1983. It is now used for storing purposes and as a public toilet. Please notice the beautiful slate roofing, which comes from a railway cabin, near Arvika railway station. 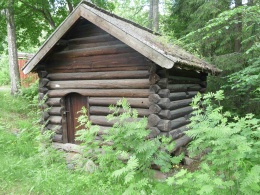 This is a mill for grain, powered by water. It comes from Ulfsjötorp in the Gräsmark parish, north of Arvika. It was erected here in 1925. It has wooden roofing. The millstones were placed horizontally and often two or three mills were placed along the same creek. This also meant that twice a year there was a busy baking period in the village, during the spring flood and the late autumn flood. 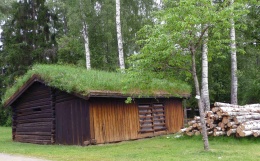 Bathing in the bastu (sauna) was actually something quite foreign to the peasants. The  bastu was used mainly for drying the flax in the long complex process of getting silky linen fibers. This linen-bastu was erected here in 1926. It was built for the village Växvik, Köla parish. In many villages in Värmland special linen bastus were built at some distance from the village because of the risk of fire. This is also why our bastu has turf roofing.

The shack was built in 1925 to house the long church boat, which was transferred to Sågudden in 1925. Earlier it served the inhabitants of the villages Toltan and Finnebäck in Brunskog parish, east of Arvika, and it was jointly owned. The church boat was essential for these two villages in order to attend the mandatory services in Brunskog church. This boat had two pairs of oars.

Slöjdstugan (the crafts cottage) was originally the cottage for the male farm hands working at the Gate Inn and farmstead. This inn still serves meals and is situated at one of the entrances to Arvika. The cottage was erected here in 1945 and is now the headquarters for The Jösse Folkdancers, who join us every Midsummer to erect the May Pole and arrange  an oldfashioned Midsummer-get-together.

Åkdonshallen was built in 1932 to house our collection of carriages. Here you can also find a vast collection of tools in agriculture, fishing, foresty and handicrafts. The Carriage Hall is open on the Sågudden Day and on request.

The Animals for children [barnens djurhage] (26) 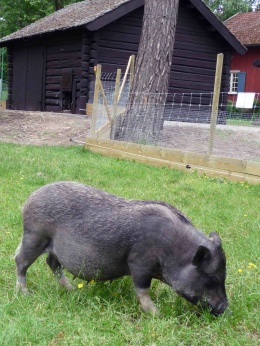 During summer children can say hello to rabbits, chicken, a rooster, sheep and minipigs. Animals are usually out when the Kafé Nystuga is open.

Further information can be found in the Storbondegården museum. 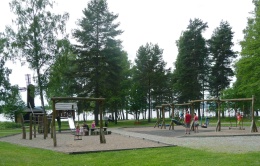 Here you will find swings, slides and climbing frames. 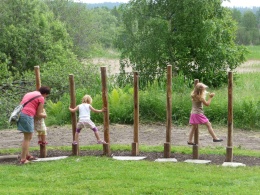 There is one toilet for the disabled.

In the herb garden you can sense the vague aroma of herbs. Most of them can be associated to folk medicine, or traditional Swedish cookery. Some, however, are there just for bees and butterflies and for their sheer beauty.

In the whole area of Sågudden you will find many trees with name plates. There are flowers around Storbondegården matching the farmhouse style of the early 1900s. All trees and flowers are carefully kept by the Town Garden Department.